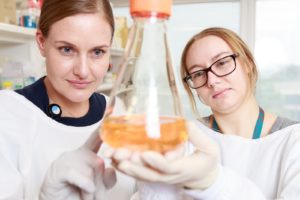 The Cystic Fibrosis Airway Research Group and Cure 4 Cystic Fibrosis welcome Dr Juliette Delhove.
Dr Juliette Delhove completed her Bachelor of Science degree in South Africa at the University of Cape Town in 2008. She specialised in biochemistry, genetics and development, and was awarded a Medical Honours degree in human genetics the following year.

Subsequently, she studied at Imperial College London in the UK where she obtained a Masters degree in human molecular genetics. This lead to a collaboration between Queen Mary’s University of London and University College London where she worked as a research assistant developing biosensing lentiviral reporters.  These were utilized to non-invasively monitor biological pathways in vivo with the aim of reducing the number of animals required for experimentation.

Concurrently, Juliette was enrolled as a PhD student at the University of the Witwatersrand, in collaboration with St. George’s University of London.  Her project evaluated the temporal signalling profiles of key biological pathways during the development of liver disease.

In 2016 she was employed at the Great Ormond Street Institute of Child Health were she was part of a consortium focused on developing a packaging cell line for large scale lentiviral production.

In 2017, she relocated to Australia and is now a part of the Cystic Fibrosis Airway Research Group where she will be utilising her skills to develop and optimise lentiviral vectors for use in gene therapy for cystic fibrosis.

On behalf of Cure 4 Cystic Fibrosis and the Cystic Fibrosis Airway Research Group, we welcome Juliette as a wonderful addition to the fight for a cure for cystic fibrosis